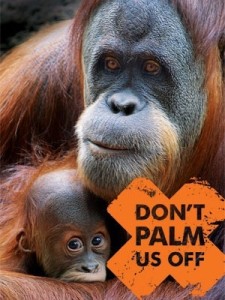 If a key ingredient of vegan cheese is solidified vegetable oil (which could be palm oil) and raisins can also be coated in vegetable oil… Would vegans be better off eating organic dairy cheese, from a local farmer?

If you know the cows, or better, have your own, I would argue this is potentially more of a vegan option than funding companies which are in turn purchasing ‘conflict palm oil’ for use in their vegan and cruelty-free products.

The key is ‘locally sourced’.  If you are buying organic raisins, from grapes in the US, and they are coated with vegetable oil.  You will need to contact the company from whom you purchased them to ask where their oil came from.  If it is any kind of palm oil, it is leading to rainforest destruction and the extinction of many wild animals, along with their habitat, poor working conditions for labourers.  Not to mention soil and water pollution from pesticides and fertilizers.

Indonesians have been driven from their homes to make way for palm plantations.   Most of these plantations are not owned by Indonesians, but by foreigners, so the profits are taken out of the country. 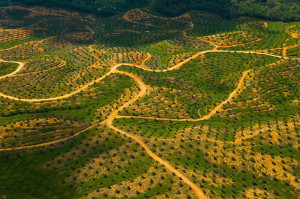 It is thought that Sumatran orangutans may be the first Great Apes to become extinct unless people help to protect them. source: http://www.orangutanssos.org/kids/orangutan_facts

If you eat a diet of locally

sourced foods, not out of packet, you are doing yourself and the environment a favour.  But very few of us, me included, can survive in the modern world without the odd vending-machine or kiosk snack.

Even if your diet is impeccable.  Look at your cruelty-free lipstick, your ‘soap-free’ soap.  Does these contain the mystery ingredient, vegetable oil or palm oil?

You are paying them, so you have the right to ask where they are sourcing ingredients from.

A public pressure campaign in Norway successfully led to the country reducing it’s palm oil consumption by two thirds in one year.  In 2012, eight major food producers cut their use of palm oil by 9,600 tons.

I have seen products now, such as meridian peanut butter, with stickers saying ‘contains no palm oil’ on.

This is the future course I am envisaging.

Similar to the cruelty-free bunny we are all now familiar with from ‘against animal testing’ products, a symbol featuring a happy orangutan, in it’s tree, saying ‘free from conflict palm oil’ would be a sign we are progressing towards a happier and healthier world for all in it.