Previous to this morning, I had ran only 15k (since having my kids 4 years ago and running in Luna sandals) .

I once again felt really happy that I live here in Malta, especially in Mellieha.  I thought the lad that threw his water over a wall into a farmer’s field was quite out of order, but on the whole people were so kind, supportive and friendly.  Even if they mostly all pointed and laughed at my feet at the start

(Only one person I passed was not wearing trainers, she was wearing fashion boots). 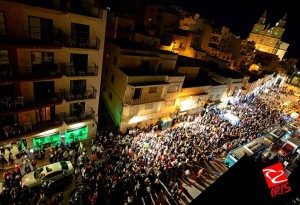 I can’t really say I actually ran all of it, rather all I could.  I didn’t really know where to go at the beginning (I really need to learn more Maltese) until I found my friends, who were walking.  So I started off with them.  It was dense with people until we got out of the village core, then I started to break away.  The bobbing and weaving through the crowds was tiring.  I didn’t really get in my zone until after around 2 hours of running.

I always seem to drink too much at the beginning or before races.  I needed to queue for and use the port-a-loos twice, once at 8k and once at 15k ish.  Not out of necessity, but really because I knew it would make me more comfortable to go to the remaining distances.  I took too much water in the beginning, at the first station, as I was told on the phone that as it was charity event, they couldn’t guarantee I would get water at every station.

I knew, by the time I had passed about 1/10 of the people taking part, I was probably nearer the front than the back of the pack, so supplies should be ok.  I thought it was very well organised and supported.  I didn’t take any of the fruits or coffee.  I sniffed around for tea but didn’t see any so jogged on.   I never eat when running, although the oranges looked juicy, eating when running invariably gives me a stitch.

I saw a couple pushing their baby asleep in the pushchair, older people, children with their parents.

It was such a nice atmosphere, perfect weather and a clear sky with an (almost) full moon and twinkling stars.  I was on the bus home when the sun rose in Xemxija.  Magical, really. 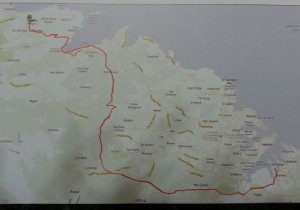 The first 5k was tricky due to the bobbing and weaving.  Then it just felt really long, the middle section.  My right hamstrings started to suddenly feel really tight, I panicked a bit about having not trained well and took it easier around Mosta.

But what Adam said entered my head, that I couldn’t do it, and I stubbornly thought, um, I can’t stop…  I thought at least my joints feel good, I can carry on, just take it easy for a bit.  I imagined how my body might feel at double this age, or triple, and realised that comparatively, it felt fine.

There is a god, by the way, and he/she made sure 12-inch Thumpers’ mix kicked in when I needed it the most…  The hard bounce took the edge off, making things feel fresh, light and breezy again.

Really bizarrely, my iPod nano ‘power tune’ is quite an obscure choice, but it was featured in the first (Ben Vennard’s) mix, I had lined-up.  A poem at the end of Ian M‘s mix picked me up from a momentary slump.  I don’t know where I’d be without my music.  Still in bed, probably.  Definitely less happy.*

Focusing on the positive made the pain dissipate, which just reminded of my Vipassana training courses.  Then, without noticing my attention shift, my right luna sandal became my arch enemy and that was my source of discontent for a bit, before attention moved back to the hamstring, then underwear annoying me, back to feeling alright, and so on.  Interesting life lesson there.  If you don’t focus on something, something else just starts to bother you

It seems discontent may be nothing to do with the object, rather our perception, after all…

I was not going for time.  I didn’t stop the clock for toilet breaks, messing around with my music / water/ clothing.  (I wore sandals without socks, trousers and a running t-shirt, with a long-sleeved top tied around my middle.  I was plenty warm enough).

I got a time of 3 hours 23 (from when I left my house actually, as I ran to the start, so there was a lot of standing around).

I feel with some proper training, 55k next year would be doable.  But 100 miles, 160k ? I don’t know how anyone does that, so fair play and all the respect I have to any super-being who can do or does that, or more!

Everyone was still sleeping when I got in, so I put the washing on, had a quick bath and cleaned up some toys.  When they woke the above picture was taken.

The one (new) reason I wanted to keep running and be home as fast as I could, was to tell my kids how far I’d run and have them feel proud of me.

I was hoping both my kids would be impressed… My daughter traced the red line on the map with her finger, all the way.  My son said, “Yeah, my friend did it too. He ran all the way, He’s 5. His name’s Bigger”.

Gozo next week may be harder, lots of hills, rough terrain and possibly hot weather.   It is a race, not a walk, so there’s that element too.

I am in the awkward position now of wanting to eat everything, starting with the disgusting stuff, but am unable or unwilling to move

What I would really like is some of the toast you get after giving birth at Mater Dei….. Hmmm.

*I’ve hyperlinked to all the mixes I listened to , they are all available for free download at the moment. I wonder if anyone else likes to run to hard house?

3 thoughts on “I ran all the 30k in my Luna sandals and felt great! Gozo 21k trail next weekend!”