In 2009 Maria Walton, a marathon coach from Arizona, was gifted with a copy of “Born to Run” by a friend. Shortly after reading it, Maria sent Micah True (the elusive and reluctant hero of the book) a Facebook message for some advice on ultra-marathons.

“It’s not my book. If it’s an autograph you are after, you’re asking the wrong guy.”

Maria replied: “No, no, I’m not a fan. I just want some advice on how to run an ultra.”

“Oh,” he wrote back. “You are going to run a little slower, run a bit longer.  And that’s it really. I don’t train, I eat some oatmeal, grab a coffee, get out the door and run.”

Micah, an American ex-boxer who gave away everything he owned, moved to the mysterious Barrancas del Cobre of Mexico to emulate the methods of the Raramuri, and ran ultra distances there carrying no gear, just a plastic water bottle and a $8 timex watch.

In stark contrast to the technological corporatisation of the sport of running, there are a tribe of ultra runners in Mexico, (brought to light in Christopher McDougall’s bestseller ‘Born to Run’) whose way of life depends on running.  In this tribe the men, women and children run ultra-marathon distances daily, effortlessly and happily.  However with growing political instability their way of life is becoming threatened.

Micah realised that due to the burgeoning drug cartels, and increase in encroaching roads, the Raramuri ways of life were being lost. The traditional ‘running people’ were hitching rides and being drawn into narcotic gang wars, so he started this race as a way to bring resources to the hidden tribes, by way of preserving their isolated community and their unique heritage skills.

“A certain intensity to really live came over me. Who knows where or what will be next year. And, I have become obsessed to leave something of sustainable significance behind, simply a message of hope, to create peace and continued sustainability for the Raramuri. If they trust me, I will do all I can to honor them, so that all of us can continue to Run Free.” – Micah True

Following Micah’s sudden and untimely death (whilst on an ordinary trail run on 27th March 2012) Maria, Micah’s girlfriend of three years, made a promise to him that she would continue to share his dream, the Message of Hope, for the Raramuri families of La Sierra Madre in Mexico.

When I interviewed Maria I asked her, what now for this tribe?  (The Raramuri as they call themselves or Tarahumara, their given name*) 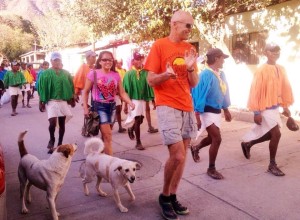 Maria chairs the non-profit organisation: Norawas de Raramuri, which supports the families both with nutrition during times of drought and support for their small farms (necessary for both physical and cultural survival).  All of the Vales (food vouchers paid for by the international UMCB participants) were distributed to the Raramuri families following the cancelled 2015 race and four Raramuri runners were sponsored to race in the U.S.A  in May and June and July.

As Micah said: “If people get greedy, and things get out of control, I will just walk away. I will work on other projects.”

It appears that this may be the way things are heading, however the message Micah True helped to bring to the world beyond the Copper Canyons, lives on in the running community: that is, running as way of life, coming together and caring for one another, rather than competing.

Micah ignited a flame that people such as Maria are continuing to spread in the Westernised world, in stark contrast to the more corporate sporting elements.

Micah in fact turned down an offer from the popular outdoor sports company, North Face, for race sponsorship. “No thanks”, said Micah. “Running isn’t about making people buy stuff.  Running should be free, man. We have no corporate sponsors. This race, is by the People, and for the People. Our only sponsorship is a concept, not a corporation. Our sponsor is Korima- a circle of sharing.”

*Raramuri translates to mean the light-footed ones, or the running people.  When these peaceful and nonviolent people were conquered by Spain, they were given the Spanish name, Tarahumara

For more information on the film, Run Free: The True Story of Caballo Blanco please see:www.runfreemovie.com

For more information on the ultra race events:  www.ultracb.com 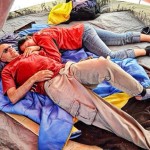 How do you feel about Born To Run the movie? I asked Maria, reputedly set to star Matthew McConaughey as Micah?

Maria: “Chris (McDougall) reached out to Josue and I within the next day after he heard the 2015 race was cancelled.  I am very happy for him and his book.  Of course if it wasn’t for his book shining a light on these running people of the copper canyons, Micah and I would never have met.  I wish him every success, but that story is Chris’s, Micah thought Arnulfo Quimare and Scott Jurek were the stars of that book.  It was not Micah True’s story, which is why we have made Run Free, the True story of Caballo Blanco.

“This project was entirely kickstarter funded.  We exceeded our targets, and premiered the film on Friday before the race in Mexico. Around 600 people watched the premiere.  It was a beautiful moment.  A lot of Raramuri don’t speak English, or cannot read, even though we subtitled the film in Spanish.  Even so, they laughed at the appropriate times when Caballo joked, and were shouting Viva Caballo! and applauding at the end.  There were clips used in that film that I hadn’t been present for, or even seen before, so I fell in love with Micah all over again seeing them.”

Seeing the photographs and family films contributed by Micah’s family, Maria was cheered when noticed Micah’s happy and joyful running style had remained unchanged since his childhood days.  Likewise, Micah had always stayed true to himself, despite the level of fame he acquired. 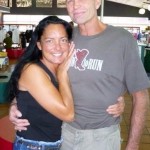 The film has achieved won ‘best documentary feature’, in Arizona international film festival, Sports Film of the Year by the Bud Greenspan awards, and an award of excellence from the Independent Film Festival awards. This is a testament to the work of Sterling Noren, the film’s director, as Micah’s message has been presented in a way that has universal appeal, even to non-athletes.

Maria said, “If you have an open heart, if you have love and listen, it makes you not just a better athlete, but a better person, a better humanitarian.”

On that point, I told Maria about a story of Netty Edwards, a runner in the UK who was forced to pull-out of a 20-mile race with no pre-established cut-off times, at 1.4 miles because marshalls told her she was “too slow” and the race “was not for people like her”.  Netty, who lost 4.5 stone through running,  had a 12-minute mile pace which would have seen her finishing in a respectable 4 hours.

Maria told me how  even though there was a time limit for the UMCB in 2014, the marshalls stayed out to let someone finish the 50-miles in 16 hours. In contrast to the more corporate-minded approach of the organisers of the above mentioned Spen 20 race, someone stayed with the UMCB finisher, who obtained his finisher’s medal and was cheered along the whole way.

You can read the rest of this “Inspirational Wisdoms” series here: